I’ve been spending time locked away in my studio against the cold of the French winter. I’ve had my plans for 2016’s painting projects drawn up for some time, surprise additions excepted, so I’ve been making copies of Great Master paintings, small, mostly done on A4 sized canvas from a book. I’ve been fairly happy with progress so now it is time to turn to ‘The Last Judgement of Pope Francis’. At 54″x32″ it is, in terms of size, the most ambitious painting I’ve yet attempted, I bought the stretcher bars and then stretched cotton canvas onto them, sizing with RSG and priming with a white RSG based primer, I made here. Old school but worth it for the peace of mind it gives. I achieve a snare drum tight painting surface, which I like and know that my painting should survive with care for at least a few centuries, unless someone destroys it for its ‘heretical’ qualities………lol. I’ll post progress, if I remember, it is not a complex painting but needs careful treatment of the light and the nude’s skin tones.

THIS PAINTING – is essentially about the oppression of women by the Catholic Church. For centuries women have had to endure physical and psychological torture at the hands of old, male, bald headed virgins and when they weren’t oppressing women they were abusing young boys, (and they still are!) It is the only way, that they could and – even now – can express their sexuality. They live in a mental prison of their own making.

The subject of the painting is the hypocrisy of religion, the Pope is presented with a moral dilemma, the viewer should make up their own solution to the problem.

Arriving at the gates of heaven, Pope Francis faces a challenge to enter. St. Peter explains that all his life, the Pope has been passing judgement on his fellow man, particularly on the right of a woman to manage her own body. Where is it written that mostly old, men can pass judgement on the reproductive rights of young women? Who can make the case that men can do this?

To have a chance of entry to heaven, Pope Francis must re-consider his position on women out of wedlock, having sex and their need to prevent unwanted pregnancies and disease by using condoms. He’s confused, he isn’t told which decision that he makes, will guarantee him entry to heaven.
Having to decide will seriously compromise the teachings of the Catholic Church on sex and hence his core beliefs.

So the Pope’s moral conundrum is thus, he must ask himself, ‘do I go back to earth and re-think this whole anti-condom issue and the rights of women to manage their own bodies, or do I go against my whole life’s preaching, stick to my core beliefs and risk being judged unfavourably? If I don’t receive a judgment in my favour, I will surely be damned to hell!

Look at the mental prison this dogma has created, how horrible, to live your life in so much fear, that you have to abuse the bringers and bearers of life – young women!

For those morally outraged or so challenged that they feel the need to commit barbaric acts of violence, I don’t care! Rage all you want, for too long the Catholic church has preached and butchered those who regard its sick fantasies of an afterlife based on ‘original sin’ as the teachings of children for children. For too long it has continued to exploit the minimal wages of the poor to retain power and maintain its splendid gold filled and jewel bedecked temples in Rome. So don’t be offended if a voice of protest sticks its head out of your arse now and again and lets you know that your shit stinks!

Progress so far, a blank canvas!

8.9.16 _ This is, as I thought proving to be  a great challenge, I’m aided though by a return to painting completely with C.S.O. oil and its wonderful range of benefits, not least of which is the simplicity of preparation and the use of good old eggs, truly a wonder of nature.  Painting at a high level requires great skill and concentration and can’t be rushed without spoiling the end result, many great paintings have taken months even years to complete, yet some academics who don’t and in fact can’t paint, think that they know how this was all done centuries ago and more to the point how quickly it was done. Good luck with that, know-it-alls!
Progress on the door mantle and the scene unfolding there, white steps and fire pits to be added.

So footnote – 2.9.16 the State of California has revised the statute of limitations period for rape and sexual crimes, extending it to have the same time limit (none) as murder. In opposition to this is the Catholic Church, it doesn’t need me to explain why that would be, it beggars belief how a cult that supports the hiding of criminal acts by its priests can still retain any credibility. Religion like witchcraft is based in superstition and ancient unscientific beliefs, I guess if you are gullible enough to buy into magic, you’ll support pretty much anything.

So, the journey continues, painting geometrically straight lines on top of textured oil paint is tricky, I used low tack masking tape as my solution to the problem. A lot of work bu the result is worth it.

as you may agree, clearly I have to paint in the horizontal rails on the gates and then finish the shading details and add the crosses but it’s coming together.

it’s great when a painting begins to ‘pop’ as I say. All the elements start to work in a ‘realistic’ way and you can laugh at comments made by people along the way who can’t even draw. For instance one mouthy fool remarked that the centre vertical of the right hand wall (in the under drawing) wasn’t straight. I told her that it didn’t matter as it was just a guide. Fair enough she couldn’t see what I could in my mind’s eye but a stupid thing to say never the less.

9.1.17 Just a note on technique, as I’ve previously stated I don’t use heat bodied oils Used in the renaissance, I think that perhaps had artists had better access to sun-thickened flax oil, they would have chosen this oil. It has even better drying properties than walnut or other heat bodied oils and is clearly archival. There is little evidence for the use of resins in paintings by Van Eyck for instance, so I won’t comment further on that, except to say, those promoting the idea that Van Eyck, Vermeer etc. used resins are usually trying to sell you something.

I’ve used for some years amber varnish and similar heat bodied mediums and I think that they are a technical ‘dead end’. When compared to the wonderful qualities of cold pressed sun-dried flax oil, (which has been cleansed of mucilage), they hold no advantages for me. Sun thickened flax oil when mixed with chalk makes a wonderful painting/grinding medium and when added to paint makes for a superior paint film. This can only be known to a painter rather than an academic, or a non-painter who spends his days trying to prove the ‘secrets of the old masters’. Amber mixed into a paint pile works as a very nice painting medium, don’t add it to whites as they will yellow, not because of a chemical reaction but because amber varnish is tinted towards orange/brown. Use it most effectively in transparent shadow glazes but don’t use it as a finishing varnish as I previously mentioned it yellows white, your clouds, surf etc. I think amber varnish is most effectively used on small paintings, where tinting of whites is not an issue. 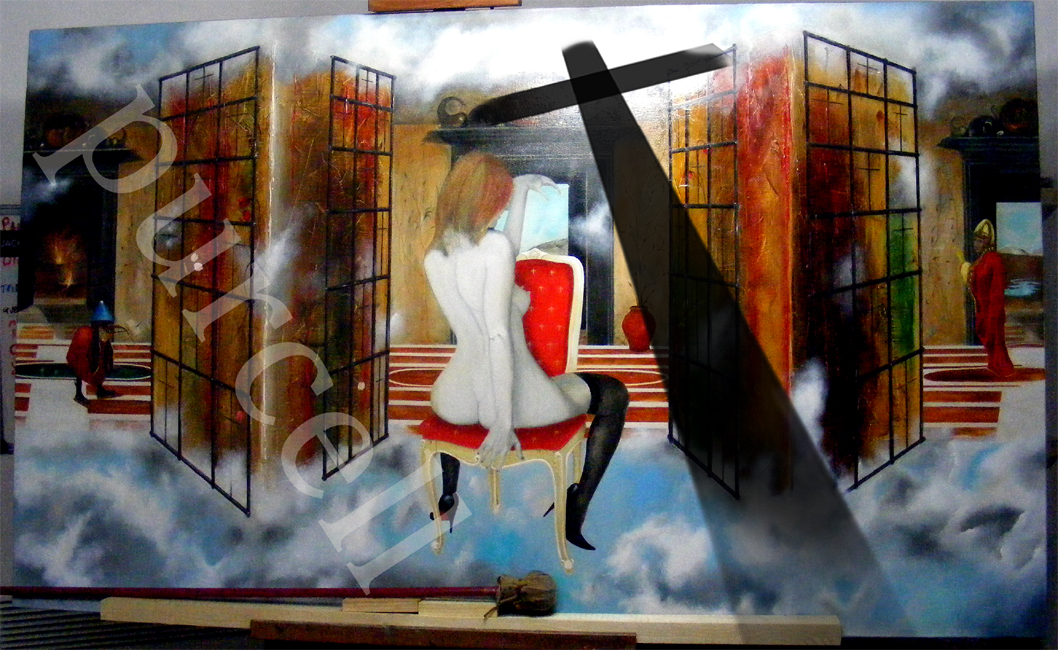 So as I continue to work up this painting to its finished state, I’ve completed the left and right gates.

Elsewhere the American Republican Party are continuing to prove that they are a regressive, xenophobic cabal of corrupt white Evangelists. And let’s understand what is meant by corruption here, politically corrupt in the sense that they will sell their souls to the highest bidder (donor, they say) morally corrupt in that they are to a man, hypocrites of the first order. One classic example being their treatment of women.

Whilst claiming that Muslim men in every way treat women appallingly, specifically when it comes to making decisions about their own lives, here, this week the G.O.P. met at the White House with the orange President, to decide how the new health care bill would impact women – specifically. This room filled with balding middle aged bigots and more elderly grave dodgers pronounced on the reproductive rights of young women with not a young woman in sight. In fact the two women in the room were there to serve sandwiches and beverages.

My painting is specifically about the Catholic church’s relationship with women but it could just as easily be about the Islamic faith, the G.O.P. or any other misogynistic sect or organisation. You would never know from such sects and political groups, that women are man’s equal and man’s partners in the journey that is life. Why as a man am I so concerned about women’s rights? Well if we were to use those rights and the treatment of women in general as a barometer of how healthy a society is, then we can see that as a species, we have a long way to go. In other words (and in some countries more than others) there is room for improvement. Furthermore I have empathy and I care about my fellow man/women.

Update from last night’s session 26.3.17, I painted the first coat on the nude figure, Just lead white, yellow ochre and Venetian red, with the orange skin tone resulting from mixing the red and yellow, toned down in chroma with cerulean blue.

16.4.17 I’m pretty happy with the nude, perhaps I could make the skin tones a little more ‘contrasty’, I’ll live with it for a few days and see how I feel, meanwhile I’ll be adding finishing touches all over the canvas. 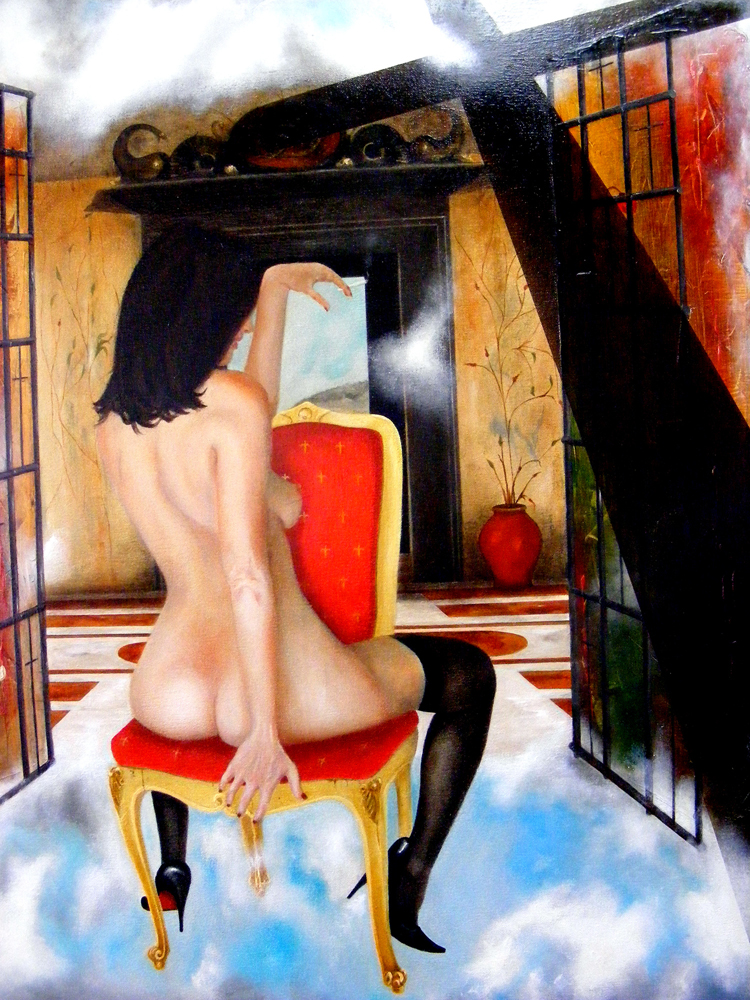 It’s the eighteenth of December 2018 and I have decided to add two more panels to the painting, thus it will be a triptych, I’ll paint the two doors, to hell and paradise on 48″ x 32″ canvas. The sketch (above) for the door to hell has now become this, I’ll start the preparatory work in the New Year.

2 thoughts on “The Last Judgement of Pope Francis”