Briefly, why would a loving god inflict such a virus on its creation? It isn’t the first time such a virus has waged war against humankind, The bubonic plague (the ‘black death’, the plague, la peste) is still active today and in Europe, for over two centuries it killed approximately 30,000,000 people.

I find it incomprehensible that a loving god would unleash such viruses on its flock, what is this god doing? Is it conducting experiments on human populations? The virus doesn’t give a damn about who it infects, or where, it isn’t conscious, it just exists as a massively destructive and unguided killer. Unguided by a god.

It makes no sense for a god to treat its creation in this way, it isn’t a question of ‘god moves in mysterious ways’, unless your opt out, from seeing that which is staring you in the face. That is supernatural belief, we have zero evidence for the supernatural. God’s creation is looking more unproven than ever at the moment as Covid-19 wreaks havoc amongst humankind; belief in a creator god is increasingly untenable.

So a Canadian energy company and its hopefully – ex-employee, general manager, Doug Sparrow – depict the rape of Great Thunberg, a young women and climate activist who has done a great deal of good in drawing attention to the impending catastrophe facing the planet. A catastrophe brought on by our previously necessary reliance on fossil fuels.
That reliance is passing, the sooner the better and the depiction of anyone being raped for the crime of standing up to polluters is despicable and cretinous.
It is particularly abhorrent when the victim of this treatment is so young and the Canadian Mounted Police claim the law hasn’t been broken enough to warrant a charge. Let’s see how long that is the case, when politicians get involved and senior police official’s jobs are on the line. From my perspective I would say for a man to think up this idea, he is a misogynist, psychologically sick and probably a sex pest. I hope he doesn’t have children of whatever sex, he needs some prison time and re-education in the ways of the modern world.

A.O.C. has seized the moment and there is no way to put her genie back in the bottle. Get used to it American corporate Dem’s and your media backers. Get used to it Fox because when she is old enough, she is your next President and I can’t wait for an intelligent women with great social policies, to transform America into the progressive country we all hope it could be.

The local authority should prosecute the parents for child abuse. It’s depressing, that parents can get away with indoctrinating their children into fear based, dangerous religious sects, such as Catholicism, Evangelical Christianity and Islam. The children of such parents will face a lifetime of looking over their shoulder, to see if their divine ‘friend’ on high is watching their every move. They will find it extremely difficult, to lose the fear of going to hell, to face eternal torture, all for the ‘accident’ of being born into ‘original sin’.
Everyone should be free to practice religions of their choice – when they are old enough to understand the ramifications, of making such choices.

In memoriam of the helpless Pittsburgh victims of Robert Bowers, I now fully support ‘Bend the Arc’ and their efforts to bring about a more equitable society.

So the Saudis actually kill another county’s citizen while in their ‘care’ and America (particularly Lindsey Graham) whose citizen it was, feigns outrage and does nothing. Imagine if it had been Iran. But of course Iran doesn’t have multi billion dollar arms deals with America. Go figure.

I make art. That’s a fact, I haven’t been posting much, mainly because, the weight of what is happening politically has just been crushing this year and I can’t keep up with it. But……..I have been painting, drawing, preparing canvases and planning new projects. I’ve nearly finished the final painting in my trilogy of paintings to commemorate the sacrifice made by the hundreds of thousands of young people during the 1st. World War and in particular to remember the soldier/poet Captain Wilfred Edward Salter Owen. ‘The End’ is nearly finished and will complete the trilogy. 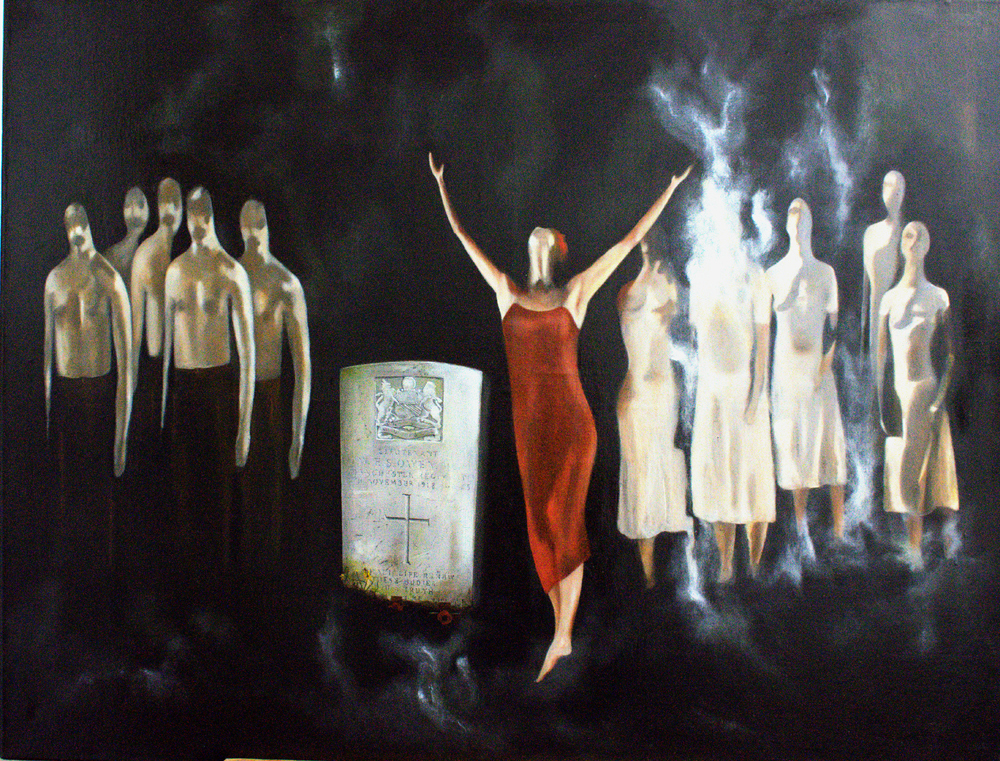 ‘Masters of Misogyny’ a large painting for which I designed and had made – by a local artisan – a new easel, 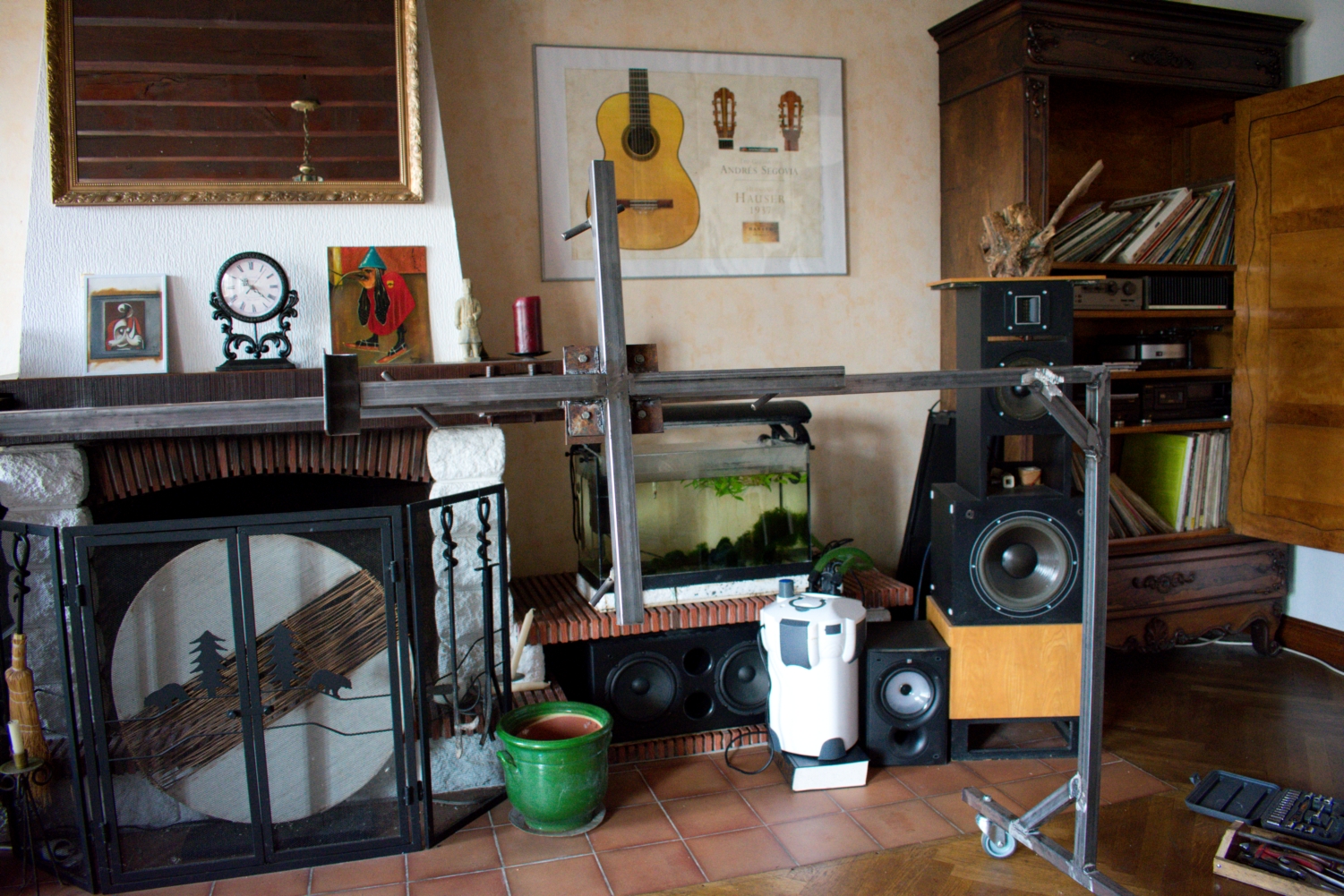 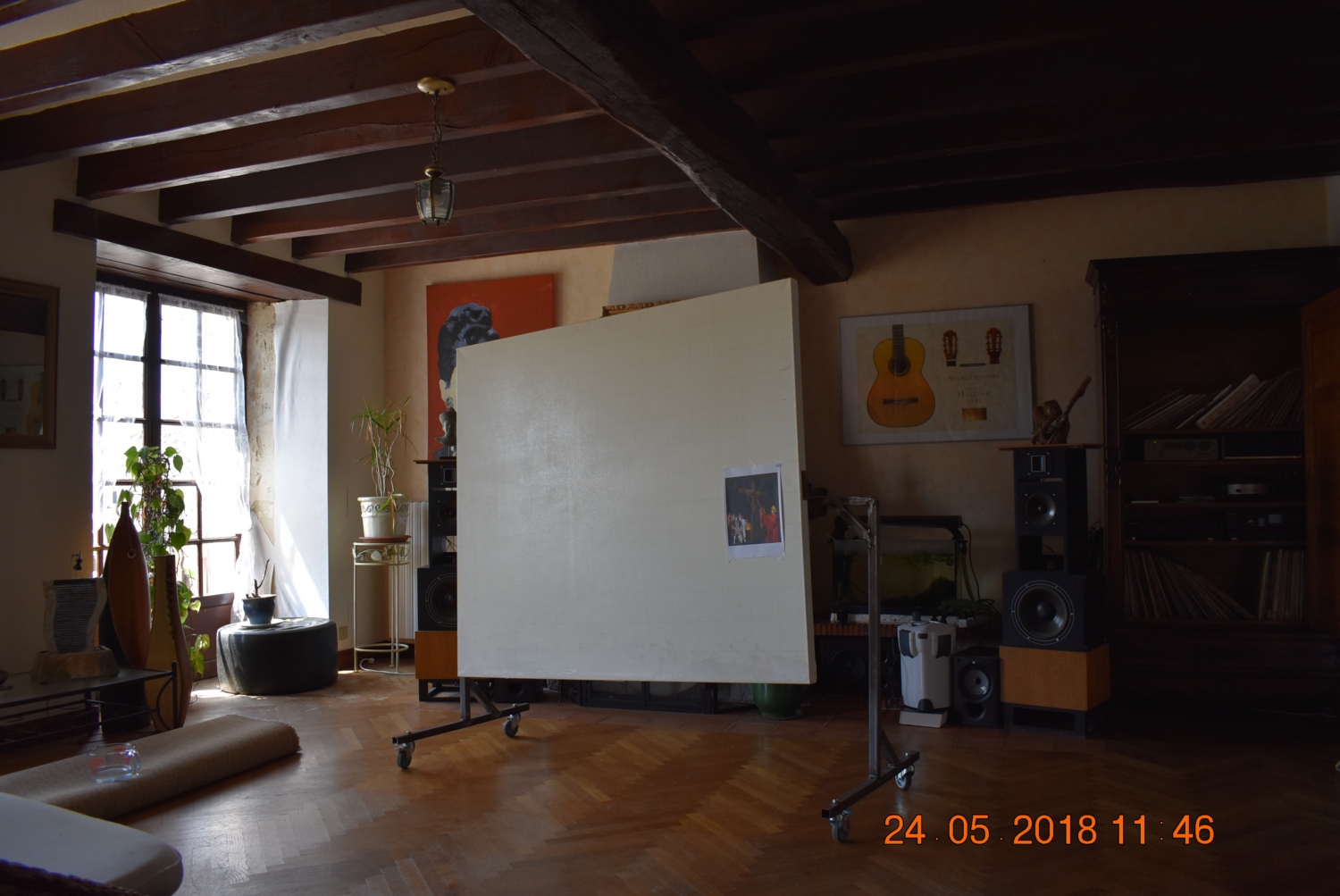 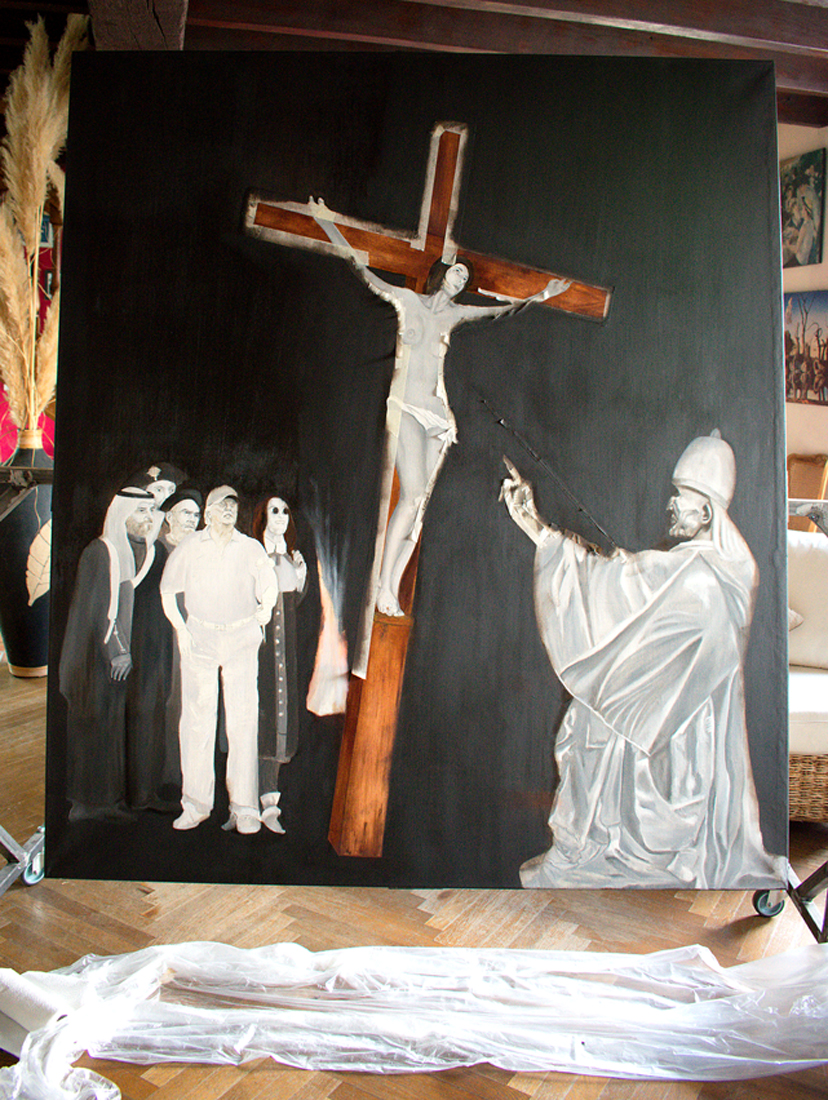 A lot of work but again this allegorical painting will say a lot about what I think concerning the treatment women suffered and still suffer at the hands of male religious leaders. The injustice was and continues to be real despite the hollow protestations in the West.  I want the religious imagery to resonate with disingenuous apologetics like Matt Slick and William Lane Craig, the likes of Tony Blair, Anne Widdecombe, The Pope and his cronies, the rotund and gormless fake Irishman Bill Donohue of the Catholic League and Islamic preachers and princes alike, all profound misogynists. The list is too long, hopefully the painting will eventually come to their notice.

I’m also working on two portraits of my model Elodie Bouffard, maybe three, two at least will be in the style known as ‘tenebrism’, with an obvious nod to Caravaggio. Still a way to go but it is taking shape nicely. 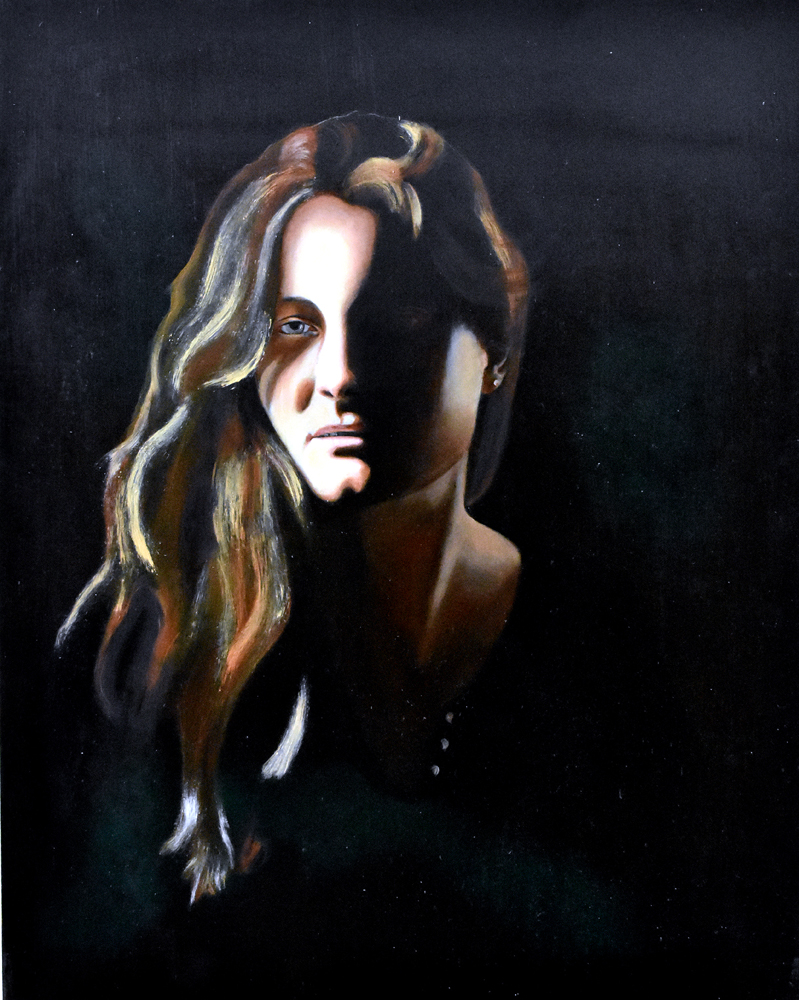 Planned future painting are ’10 Downing St.’ starring the severed heads of five British Prime-ministers impaled on the 10 Downing St. railings. I may call it Traitors’ Row. I’m sick of these bastards getting into power and doing nothing for the country and its people. I’m thinking particularly of Thatcher, Major, Blair, Cameron and May, all lying cunts, who betrayed the British people and made themselves and their cronies rich at the electorate’s expense.

As a life long socialist, this is great news to start my day.
article

Just watched this film, god that was hard to watch at times. Liked the music score too, interesting combination of an electronically modified orchestra and electronic effects. Elgar’s ‘Nimrod’ was added almost subliminally, clever stuff.

Composed in 1727 Bach’s Passion is at the centre of his great religious works. Undoubtedly a Christian, Bach believed, as far as we can tell, that he was creating music that glorified his god. As an atheist I simply replace ‘religious’ with transcendent, thus apart from the sheer turgid nature of some of the text I can enjoy Bach’s wonderful music without the need to supplicate myself before a mythical super-natural monster. Some have argued that this music simply couldn’t exist without the religion it is pinned to, probably not as the text is at its core, but there are many examples of the transcendent in Bach’s instrumental music, without any such religious text being anywhere in sight, or earshot. Listen here Erbarme dich mein gott  for a truly amazing aria from The Matthew Passion, featuring the contralto Delphine Galou.